Noel Wolfman
I am a passionate Dollhouse and Doll enthusiast. When I can't find what I want...I make it. This has led to wonderful adventures meeting artists in the field and creating my own work. One of the greatest joys of collecting is to share that passion with others. I am a founding member of the Renaissance Doll Study Club, a chapter of the United Federation of Doll Clubs. If you have a passion for dolls and dollhouses and live in Southern California, please let us know so we can arrange for you to be a guest at one of our meetings or presentations. By day I was a long time VFX and Animation Producer, you can find my credits on Films such as Madagasgar and the Tinker Bell Movie and on Video Games such as World of Warcraft, Starcraft and Overwatch. Now that I am retired, I have been able to devote more time to the study of antique dolls and dollhouses. Building on those Antique traditions through modern re-creations helps teach history and give historical and artistic perspective to these fabulous items. For information on my lectures and dollhouse programs please contact me or leave a note here.

This is another recent addition to my collection of antiques.  It is from the 1800s though it has had quite a bit of restoration work done to the exterior.  The work was done years ago by Phoenix dollhouse artist, the late Mickie Haynes.  She sold the house to Jackie McMahan and it was on display for several years at Angel's Attic Doll & Miniature Museum in Santa Monica.  As with the previous items I have posted about, I bought this house when the Museum closed its doors following Jackie's death in January of 2017. 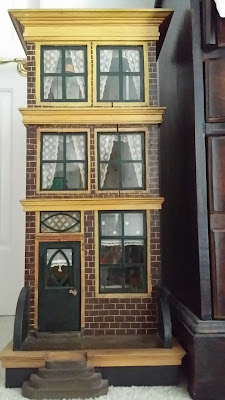 The house is about 2 1/2 feet tall.  I believe it originally opened in the front, but was updated somewhere along the line and now has 3 doors cut in the back of the house. The yellow molding that goes around 3 sides of the house must have been added when this is done.  Perhaps the front of the house was too damaged to allow the door to open and so it was stabilized. 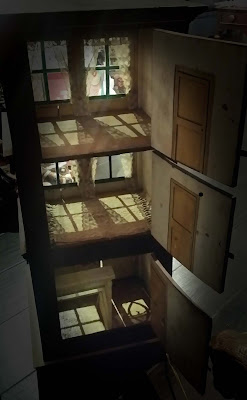 When it was restored a new base was created for it and it houses a small electric transformer which powers a bulb on each floor.  (The new base ends after the bottom yellow molding and includes the stairs) 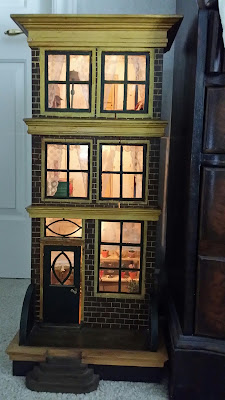 When I first saw the house it was set up as a grocery store, with a wonderful 3 shelf unit which had cakes and groceries on it, and some wonderful old furniture and dolls in the upstairs rooms.  By the time I was able to purchase it, all of the interior furnishings had been sold.  As I went to retrieve it from its location on the 2nd floor of the museum, I noticed the shelving unit that had been in the house had fallen out and was under a nearby chair!  I scooped it up and restored it to the house, though I have no way of knowing if the shelves were original to the house or not.  But they fit perfectly.

I have done a lot of research and finally found a very similar house in the museum in the Hague in The Netherlands.  (link at the bottom of this post).  That house is only 2 stories but it is also arranged as a Grocery store on the first floor and if you look VERY closely at the picture of it on the Museum's website, you can see some shelves through the door.  So I am content in my belief that the shelves are original to the house.

As I have several Grocery stores in my collection, and I also have a number of vintage and antique potted plants, I have decided to set the first floor shop up as a florist shop for now. 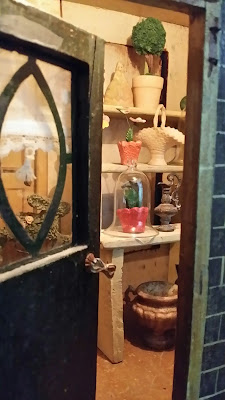 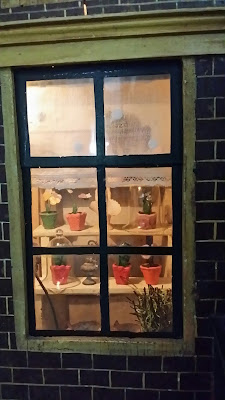 There is very minimal furniture inside.  I added a metal fireplace and some beds and will continue to work on furnishing the house with items from the appropriate era as I find them. 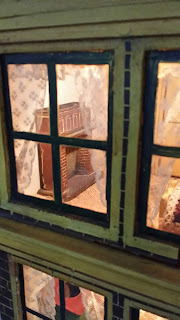 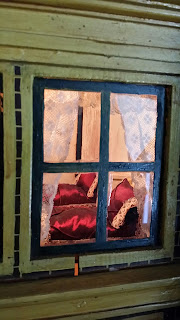 Here is the link to the similar house in the Hague Museum in Holland and a picture of that house. 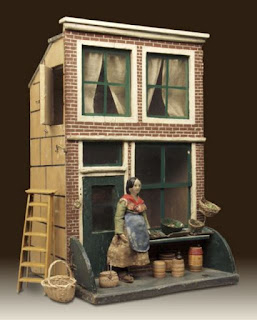 Don't forget to look closely at the picture on the site, and zoom in to see the faint shelves though the window!

Posted by Noel Wolfman at 5:04 PM No comments:


Here is the largest and most spectacular of the 3 shops I bought from Angels Attic.   It is an Art Nouveau style Grocery Store.  When I first started visiting Angel's Attic I would always go to see this shop.  It was my absolute favorite thing in the museum.  I feel very fortunate to be its current caretaker!

It is huge, measuring just shy of 4 feet in length.   I believe it to be a Christian Hacker shop from 1905.  I am still researching this one as well as the Hat Shop in the previous post.  They are identical in motif and match the one in the Nurnberg museum.  It is that museum listing I am using to date and identify the maker of this shop. 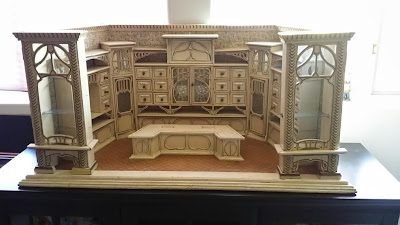 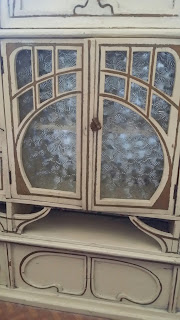 As you can see the back doors open as do the closet/side doors.   The mirror back panels have some age related crackling to the silvered backing.  The mirror glass is in fine shape. 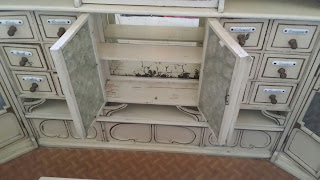 Below is a close up of the door knob.  The hardware is the same on all the doors. 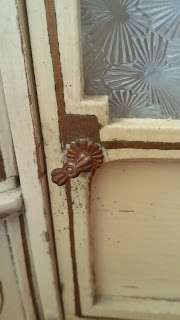 The two front windows are hinged and they swing open.  You can see the 1 damaged drawer in this photo.  The screw on the outside panel is for a doorbell.  It came off in transit and I need to reattach it.  The shop was re-papered in the past, both the walls and the floor. I also think it was carefully repainted in some areas.  Most notably on the decorative panel above the glass doors. 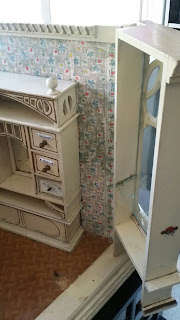 Side view (Both sides are identical) 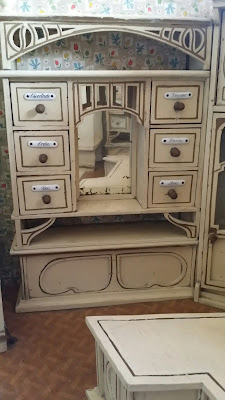 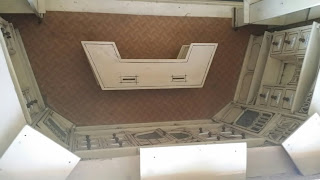 Here are the markings on the bottom of the shop: 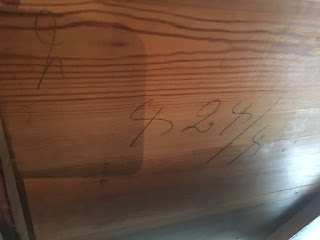 This is a picture of the Grocery Store as it was displayed in the Museum.  All the contents and dolls came with the shop.  Now that I have finished dusting and cleaning it, I will be setting it up with all the little food stuffs. 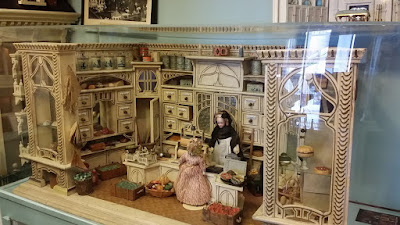 Here is the link to the similar shop in the Nurnberg Toy Mueseum:
Lydia Bayer Toy Museum Nurnberg

Posted by Noel Wolfman at 4:25 PM No comments: